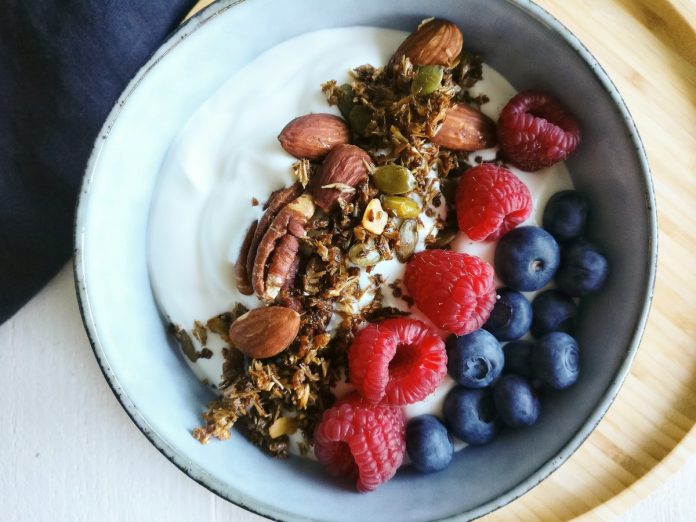 Start your day with a bowl of yogurt with fresh fruits and a crispy granola made from spent grain. A kind of breakfast with beer, but without the alcohol. Spent grain, in the Netherlands called ‘bierbostel’, is the leftover grain after brewing a tasteful beer.

Spent grain is very nutritious, full of high protein and fiber concentration. It’s often used as cattle feed, but is also perfect for baking. Beside bread you can also make a granola from spent grain. Tasty with almonds, pecan nuts and pumpkin seeds.

Before you start to roast the spent grain, it’s important to dry it first. Spread the spent grain over a baking tray, covered with baking paper. Dry the spent grain in the oven for about two hours on a temperature of 60 degrees Celsius (140 F). Scoop occasionally.

Mix the dried grains with the almonds, pecan nuts, sunflower seeds and the remaining ingredients. Spread the mix again over a baking tray and roast in the oven for ten minutes on a temperature of 180 degrees Celsius (356 F). Scoop true the granola and put back in the oven for another 5 minutes. Allow the granola to cool and store in a sealed glass jar.

Delicious with yogurt, blueberries and raspberries.

Where do you get your spent grain from? Brew your own beer or ask for it at the local brewery.